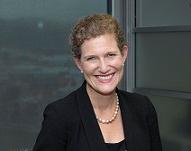 Rebecca Kitteridge, Director-General of Security will explain the role of the New Zealand Security Intelligence Service, how the agency works and carries out security investigations and will discuss some of the threats New Zealand faces that our intelligence agencies are working to counter. The current Director-General of Security is Rebecca Kitteridge, CVO. She was appointed in May 2014.

Ms Kitteridge sees a secure state and a well-informed government as fundamental in supporting and maintaining the New Zealand way of life. With a legal background and professional experience in public sector leadership, she believes in the effective operation of democracy, the constitution, the rule of law, ethics and good process.

Ms Kitteridge came to the NZSIS after six years as Secretary of the Cabinet and Clerk of the Executive Council within the Department of the Prime Minister and Cabinet. She served under four Prime Ministers and four Governors-General in that role and in earlier roles in DPMC. She also worked in the Ministry of Foreign Affairs and Trade, and started her career with nine years in the private sector.

In March 2014, she was appointed as a Commander of the Royal Victorian Order, in recognition of her service to the Queen as Cabinet Secretary and Clerk of the Executive Council.