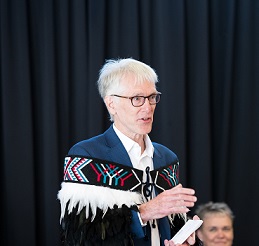 Paul Hunt, the Chief Human Rights Commissioner, argues that the public service is in a unique and strong position to advance New Zealand’s national and international human rights promises. If human rights are in the policy-mix early in the policy-making process, they can help officials design effective, robust, inclusive policies. After-thought human rights compliance checks are missed opportunities to improve policies for all. Early consideration of human rights can help to ensure Te Tiriti is taken seriously, disadvantage is suitably addressed, appropriate consultation takes place, and human rights promises are kept. Human rights and Te Tiriti can fortify education, housing, health care and protection, and accessibility for all. A skillful public official promotes human rights for everyone in Aotearoa. A national of Aotearoa and UK, Paul Hunt studied law at Cambridge University and Waikato University. He has lived, and undertaken human rights work, in Europe, the Middle East, Africa and Aotearoa. In 1992, he was appointed senior lecturer at Waikato University and in 2000 he was appointed professor at Essex University. Paul served as an independent expert on the UN Committee on Economic, Social and Cultural Rights (1999-2002) and UN Special Rapporteur on the right to the highest attainable standard of health (2002-2008). Between 2011 and 2013, he advised WHO Assistant Director-General Dr. Flavia Bustreo on human rights. He was a member of the statutory public inquiry into emergency health care established by the Northern Ireland Human Rights Commission (2014-15). In 2018, he was a member of the Advisory Group on Human Rights Leadership established by the First Minister of Scotland, Nicola Sturgeon. Paul has written extensively on civil, political, economic, social and cultural rights. In 2008, he was awarded an Honorary Doctorate from the Nordic School of Public Health and he became the New Zealand Chief Human Rights Commissioner in 2019.