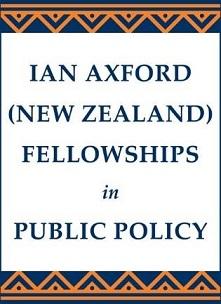 The Ian Axford (New Zealand) Fellowships in Public Policy programme offers outstanding American professionals the opportunity to gain experience in public policy in New Zealand, and to gain first-hand knowledge of economic, social and political reforms, and management of the government sector.

The programme has three goals: to reinforce New Zealand-United States links; to improve public policy practice in both countries by the cross-fertilisation of ideas and experience; and to build an on-going network of public policy experts on both sides of the Pacific. Towards the end of their Fellowships, the Fellows report back at a public seminar. We encourage members of the public service to attend this seminar, in order to learn about interesting projects that have been undertaken by practitioners who have a US perspective.

The four current Ian Axford Fellows in Public Policy share their experience of policy-making in New Zealand, in a panel discussion chaired by Roy Ferguson, QSO.

Laura Berntsen serves as Domestic Policy Advisor for the U.S. Senate Finance Committee and Ranking Member Ron Wyden (Democrat-Oregon). Laura develops national public policy in the fields of welfare, unemployment insurance, child welfare, child care, education and workforce development. Prior to joining Finance Committee staff, Laura worked in Sen. Wyden’s personal office from 2011 to 2013 and in the House of Representatives for Rep. Jim McDermott (Democrat-Washington) from 2006 to 2011. Laura holds a Master of Arts from Georgetown University and Bachelor of Arts from the University of Washington.

Laura is being hosted on her Axford Fellowship by Treasury.

Abstract - The Changing Nature of Work: Strengths and Shortcomings of New Zealand's Benefits and Protections for Workers in Non-Standard Employment

Nate Swinton is Senior Trial Counsel at US Department of Justice and Adjunct Professor of Law with Georgetown University Law Center. Nate’s previous roles include clerk to federal magistrate, district, and circuit court judges, and he spent eight years in the Federal Programs Branch of the Department of Justice’s Civil Division, and seven months as detail to the Office of the Vice President.

He is being hosted on his Axford Fellowship by New Zealand Police and the Ministry of Justice.

Abstract - Trade-offs During a Turning Point: Implications from a Year of Change to New Zealand's Firearms Laws

Alexa Daniels-Shpall is a Police Special Investigator at the Los Angeles Police Department’s Office of the Inspector General. As a member of the Use of Force section, she has authored several public reports on the LAPD’s policing practices and use of force, which have resulted in significant changes in department-wide policies and procedures. These reports have covered topics such as “suicide-by-cop” incidents, less-lethal force options, and a comparison of use of force policies, investigations, and training at five U.S. law enforcement agencies (including the LAPD). Additionally, Alexa drafted the LAPD’s policy for releasing video from critical incidents to the public, and she is also responsible for monitoring and providing input on the development and implementation of LAPD training.

Prior to joining the Police Department, Alexa worked as a Special Investigator at the Los Angeles Fire Department’s Office of the Independent Assessor where she wrote public reports on the LAFD’s employment-related litigation, risk management practices, and disciplinary system. Alexa is an attorney and holds both a Juris Doctor and Master of Public Policy degree from the University of Southern California, as well as a Bachelor of Arts degree from the University of California, Los Angeles.

She is being hosted on her Axford Fellowship by Independent Police Conduct Authority and New Zealand Police.

Abstract - Strategies for (Re)Building Community Trust: A Review of Practices in the New Zealand Police

Paul Phifer has worked for the U.S. Fish and Wildlife Service (Service) since 2001. For the past decade, he has served as the assistant regional director for Ecological Services in the Service’s Northeast Region. In this capacity, he manages a dozen offices working on a host of species and habitat conservation areas, including endangered species, environmental contaminants, coastal issues and wetlands. He came to the Northeast from the Pacific Northwest, where he was the Northern Spotted Owl Recovery Coordinator.

Prior to working for the Service, Paul was a diplomat the with U.S. Department of State negotiating, at the United Nations, international treaties on invasive species and movement of genetically modified organisms. After graduate school, he led field research in New England to study the effects of environmental contaminants on birds and bats for BioDiversity Research Institute.

He is being hosted on his Axford Fellowship by the Department of Conservation.

Abstract - A Climate Change Adaptation Plan for the Department of Conservation